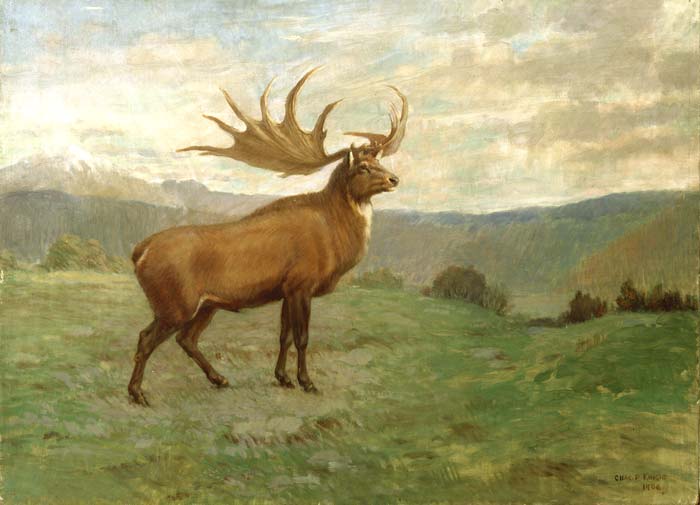 What kind of bed do you sleep in?

Now, imagine fastening two of these beds on top of a deer’s head.  If it were a regular, everyday North American white-tailed deer like Bambi’s dad (Odocoileus virginianus), it would collapse and if it could speak English, it would probably say “Hey! What’s the big idea!? Get these frickin beds off my head!”

No modern deer or member of the deer family (Cervidae) could support antlers this large.  The largest antlers in the world currently belong to moose.  With antlers a whopping 1.8m (6ft) across, they basically walk around with double beds on their heads.  Only one bed each though.  Moose antlers are pitiful compared to those of today’s amazing Pleistocene monster: the Irish Elk (Megaloceros giganteus).

Despite the “Irish” in their common name, these giant deer inhabited most of the Pleistocene Palearctic (Present-Day U.K., Ireland, Northern Europe, and Russia).  They are known as Irish Elk because a large number of bones and antlers have been found in Irish peat bogs.  They stood an impressive 2m (6.5ft) high at the shoulder and had antlers that spanned up to 3.6m (12ft) and weighed 40kg.  They first appeared around 400 000 years ago and were roaming the plains of Ice Age Europe until 7 700 years ago. They had thick vertebrae to withstand the torsion their antlers produced and tendons that linked their neck to an anchor point on their back so they could lift their heads.  The antlers were dual chick-magnets/dude-repellants.  It is believed that the males would stand on the crest of a hill near a group of females, grunt, and say “Look at these bad boys.  Yeah, it’s like I’ve got two double beds on my head.  Come and get it.”  But the shape of the antlers indicates that they were more than just for show:  they were supremely suited for jousting.  There were sharp tines on the outside that could be used to gore the competition as well as large, broad areas for defence.

How the heck did the antlers get so big?

An interesting fact about most deer, moose, and other antler-growing fauna is that they grow and shed their antlers every year.  Typically, antlers are grown in the summer.  During this time, the antlers are covered with soft skin called velvet which brings blood to the area.  Cartilage is usually deposited on the ends and gradually replaced by bone.  By fall, just in time for mating season, the velvet is shed to reveal a brand new set of antlers.  Once the deer have mated, it is hypothesized that their testosterone levels drop dramatically and because of this, the antlers fall off.  Growing antlers is a very nutritionally expensive process.  It requires a lot of calcium, phosphorous, and energy.  Luckily for the Irish Elk, grass has a a high concentration of these minerals and grass covered most of its sub-glacial habitat.

Grass wasn’t quite enough, so Megaloceros also cheated a little bit to make calcium-ends meet. Their bodies stole some minerals from their bones in order to deposit it on their antlers.  Most years, they repaid this loan by eating a lot after mating season and so having these ginormous antlers conferred a reproductive benefit with little survival cost.  For the Irish Elk, it was the real estate market in pre-2008 America.  In retrospect, the loans were bad, but… it’s basically a free mansion!  Needless to say, there was a crash.  When the climate warmed up, trees and forests invaded the plains that Megaloceros needed to survive.  As you can imagine, these guys weren’t very good at navigating through forest.

The simple solution when faced with scarce resources, one might think, is to downsize: smaller body, smaller antlers.  Evolution doesn’t always work like that though.  The females, through thousands of years of mating with large-antlered males, had developed a preference large headgear because it demonstrates that a male is healthy.  The large-antlered males who get chosen are the ones with the large-antler genes.  So new fawns grow to have large antlers just like their papas.  The climate changed too rapidly for sexual preferences to keep up.  Soon the forests crept in and the mineral loans couldn’t be paid back in time before winter.  The males would start the next season with debt and the cycle would continue until a weakened bone snapped.

Too large for most predators, these majestic creatures roamed the European plains unchallenged for almost 300 000 years.  Their demise was quick and owed to a changing climate and an inability to adapt. I think, in their memory, we should create a new size of bed: Irish Elk.  It would be the size of two double beds put together end-to-end and each would come with a cast of a rack of Megaloceros Giganteus antlers as a headboard.