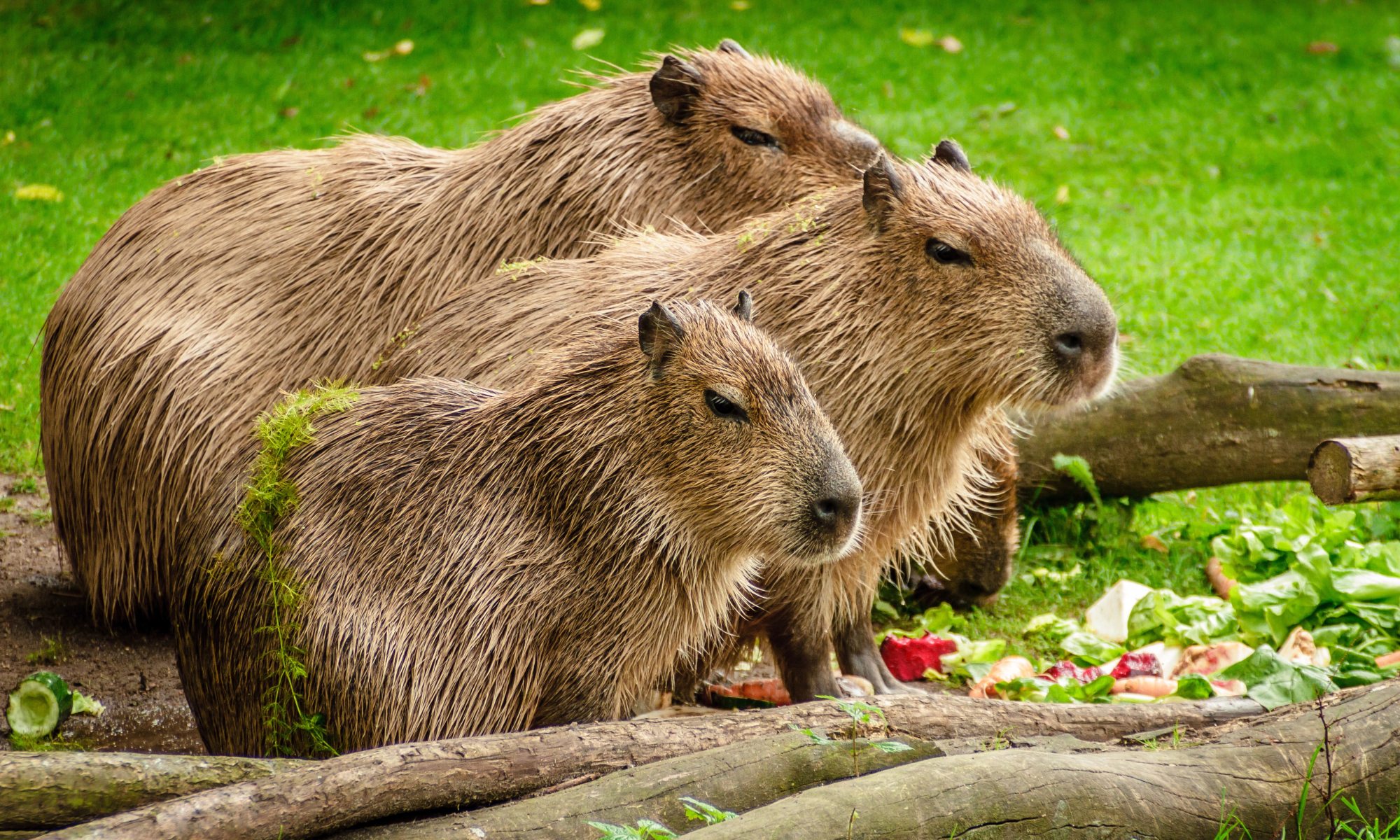 The capybara is known by lots of names. But whatever they’re called, their intriguing combination of dog size, rodent cuteness and chill demeanor has been occupying an embarrassingly large part of my attention this week.

So what is a capybara?

Native to a large swath of South America, these animals are related to guinea pigs and rock cavies. They eat grass, love to wallow in shallow water, and are pretty decent swimmers. They may look slow, but they can reach top speeds of 35 km/h.

Like many other large rodents, capybaras are social creatures. They live in groups of 10-20, but when the grass they like to munch is scarce, they can gather in groups as large as 60 or 100. But unlike most other members of their taxonomic family, they’re not at all skittish. They don’t seem to mind other animals hanging around (or on top of) them.

And, in an interesting turn of events, they may have some cancer resistance like their cousins the guinea pig. While a few instances of capybara cancer have been reported, they are known to have Kurloff Cells, which are suspected to play a role in immunity and cancer resistance.

As may be apparent, I’ve fallen down a deep capybara hole. And I’m not sorry.

I’m also not the only one. There is a moderately popular Tumblr page devoted to pictures of animals sitting on capybaras. There are several subreddits and even a some celebrity capys: JoeJoe has a YouTube page and a book was written about CappyBoppy. Capybaraworld is a blog devoted to all things capybara.

In the summer of 2016, capybaras came to wider public attention when the two capybaras in Toronto’s High Park Zoo made a break for it, living in the wilderness of Western Toronto for nearly two months before being apprehended. For their daring escapade they were named Bonnie and Clyde. And the adventure must have jumpstarted their libidos because pretty soon three cute “capybabies” were born. The capy family was skyrocketed to local fame and the poll to name the babies got nearly 45000 responses.

Suffice it to say, the internet loves capybaras.

And why not? There are so many reasons to love them.

But this isn’t just a love letter to capybaras, it’s a call to action.

We can all agree these animals are amazing, but what do you call a group of them?

A group of owls is a parliament, many ferrets make a business. You’ve heard of a murder of crows or a pride of lions, but what about these wonderfully calm and gregarious creatures?

I’ve looked on every list I could find, but it appears there is no collective noun for capybaras. Some people have suggested herd, but that’s lame.

So let’s change that. An animal this awesome needs an awesome collective noun.

Unlike in biological naming, there is no official arbiter of collective nouns. No committees, no submissions, no criteria. The only way that collective nouns get accepted is if they’re used. So let’s agree on one and start using it!

Because they are so ridiculously chill and spend a lot of time in literal or figurative spas, here is a collective noun for your consideration:

A meditation of capybaras.

It also works in Spanish (meditación) and in Portuguese (meditação).

Spread the word and start using it, so this contemplative and curious creature can have a cool collective noun like all the best critters.

3 Replies to “A meditation of capybaras”