I know it’s been pretty silent here since I finished my epic 26 weeks of blogging.  While I’ve let a bit of dust settle onto this blog, that doesn’t mean I’ve been idle.  I’ve been hard at work at the Royal Institution of Great Britain helping to create this year’s CHRISTMAS LECTURES.  I did a lot of fact-checking, idea-generating, troubleshooting, and general running around.

The theme this year was human spaceflight and the lectures were presented by the wonderful Dr. Kevin Fong.  It was an incredible opportunity to work with an amazing team of scientists, science communicators, producers, directors, prop-builders, and all sorts of other collaborators.

It was pretty special to be working where Michael Faraday once worked, on a series of lectures that he started in the 1800s.  For anybody wondering, the novelty didn’t wear off and my scicomm crush for him has only deepened.

Not only did three audiences of 400+ 11-17 year olds enjoy the lectures I helped make, but they were also broadcast on the BBC and are available here (Lecture 1 – Lift Off), here (Lecture 2 – Life in Orbit), and here (Lecture 3 – The Next Frontier).  Keep your eyes peeled for a guy running around in a flight suit cleaning up after Kevin who looks suspiciously like me.

Below are a few of my favourite snaps from my time behind the scenes.  If you’re in the mood for more, check out the Ri’s Instagram account. 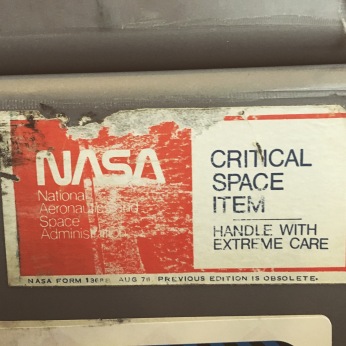 During my time as the CHRISTMAS LECTURES Assistant, I also got to work on the Ri’s Advent Calendar, an ambitious project that saw 24 pieces of space-related content go online between December 1 and 24.  A Place Called Space looks at the human stories of spaceflight.

I had a hand in a few pieces, including researching an infographic of all the astronauts to have gone to the ISS, voicing over a series of films about the space race, presenting a video about how water behaves in weightlessness, and (my favourite!) interviewing real astronauts about their experiences in space.

So that’s what I’ve been up to.  As for what’s next, I just had my visa renewed for 2 years and will be living in London.  I don’t have plans to start anything as ambitious as the ABCs, but I do hope to put bits and pieces here periodically.  So keep an eye out!

One Reply to “CHRISTMAS LECTURES Assistantship”